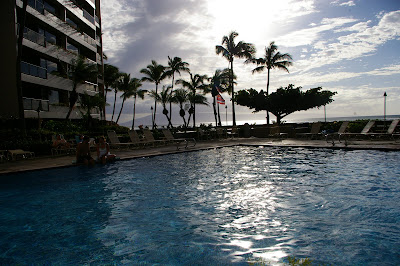 We’re back!
We’re browned!
We’re saying Aloha to each other when we wake up in the morning.

Hawaii has happily left its mark on us assuring Dick and Patti that they did the right thing last year when they bought the two week timeshare condo at the Sands of Kahana in Maui, Hawaii. Our morning (7:00 am – 8:00 am) walk of 70 minutes to the Java Jazz Coffee Shop, also called Good Ass Coffee, started off each day with cheery “Good Mornings” offered over and over again as we passed/met other walkers, joggers, bikers of all ages on this same street running alongside the pounding surf of the Pacific Ocean.

Yes, we were in that surf peering down, left and right for more and more brightly colored fish of all sizes and shapes. Boy, does The Lord have artistic talents or what! Our two favorite places were Black Rock, where turtles also lay in wait to “smile” up at one, and the place we named “Shady Beach” for all the trees reaching out to serve as shade, and/or hammock-holders. 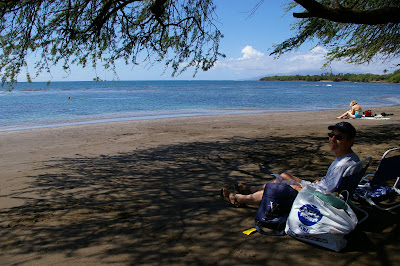 And then there was the food. Having a Fresh Fish Market and Outdoor Food Market on our walking street didn’t hurt. Our first “fancy” food outing (this means wear a “nice” shirt, at least) was a luxurious dining experience (one we went on last year w/ Mike & Bonnie, and suggested to us by neighbors The Nehls and The Bates) was Canoes where one wondered if the surf would slap up on the windows! That food could NOT be beat, and of course, it was fish with gorgeous presentation; unless it was the famous Hula Pie at Leilanies in Whaler’s Village. 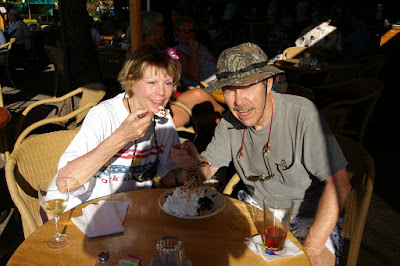 Other food was what we fixed ourselves in our cozy condo kitchen where we invented our first “Smoothie” filled with fresh Hawaiian fruit (mainly bananas – did you know they grow upside down? – as well as Hawaiian pineapple, strawberries and blue berries along with soy milk which gave us “creamy” w/o much soy taste or calories. We also practiced with veggie frittatas. Then there was Valentine’s Day at The Plantation House where Mike’s friend, Bonnie’s friend took us last year. Wow! Yum! Dick had the expected freshly caught Pompano and I ventured out for rack of lamb that blew me away with it’s delicacy and flavor. With all that, I must admit that the GREATEST and BEST were the views while eating. There is no “green” any greener than Hawaii’s (how do they do it?). At Canoes it was the moored sail boats wafting to and fro in the breezes and the white surf against the blue, blue ocean. At The Plantation it was the rolling golf greens ending at the blue ocean shore. Gasp.

We did little shopping but did love wandering through Lahaina where Bonnie had taken us last year, and the Wyland Gallery, where we asked about the most beautiful coffee table ever made by sculptor, Wyland, who only wanted $20,000 for these three bronze turtles supporting an oval glass top. I bantered with the salesman telling him that once I asked my husband if I could sell our son (I hope you’re not reading this, Alex) to pay for a fabulous statue that I do have now in picture only. The salesman laughed and said he had one client who actually sold his house to pay for a Wyland. Hmmmmm. And then he told me (after saying I could not photograph it) I could find it on line. And so I shall.

The ice cream in Lahaina was yummy, and the artists’ efforts for sale under a huge Banyan tree canopy were spectacular. 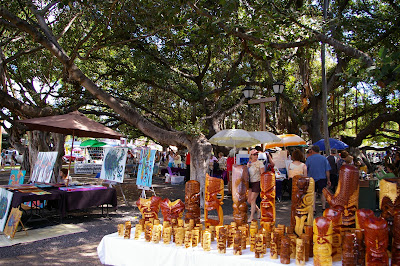 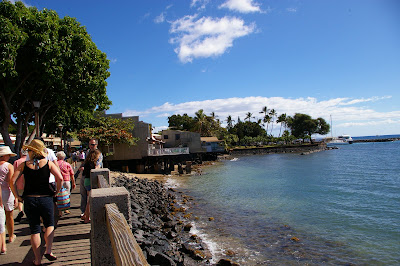 Finally, before we left, Patti rushed outside where we had been taken on a nature walk by “Bill” of The Kahana Sands, to photograph (especially for Penny) some of the Flora beautifying Hawaii everywhere. No, I did not know that bananas grew upside down.. And I did not know the chunks and holes in the bark of the soaring palm trees was NOT due to bugs, but to the spiked shoes worn by the men who climbed these tall, tall trees to take down the coconuts before they fell down and bonged someone on the head possibly ending in death. Gad. And I did not know that these beautifully leafed, huge bushes became “sliced looking” leaves due only to the wind, not naturally! And I did not realize that the Croton shrubs developed their bright array of colors leaf by leaf over time, all having been green, originally.

And yes, after all that beauty, it was O.K. to leave, for we will return next year. We got back into the swing of things with our five hour plane flight which flew us right back into reality. Patti escaped into her Christopher Reeves bio, “Still Me,” leaving her in tears all the way home, while Dick Blide continued to enjoy his latest addiction, Sudoku,

patricia and richard
Posted by Know & Do at 2:00 PM No comments: