Ah, it’s been many a moon since the “Dairy Queen Team” left Pagosa Springs, CO to visit, now in Kalama WA. That is to say two heroes of the Blide book, Heartfelt, reunited to enjoy reminiscing and remaking memories, many of them planned at the Pagosa Dairy Queen. . .which did not exist. But that’s another story. . .

When Ingrid and Doc Jim Knoll found their way following Jim’s “Locum Tenins” stint in California. . .up the coast to Patti and Doc Dick Blide’s “new” WA home of 4 years, they were reminded that it was Hallowe’en night. . .and so, were appropriately “knighted.” 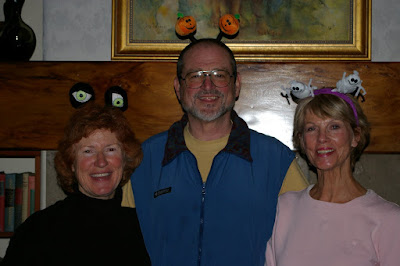 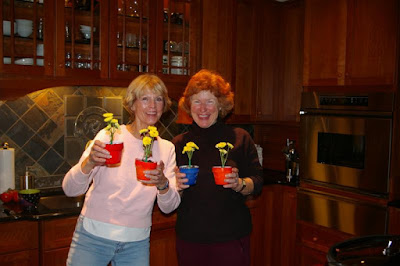 The ricochet-like memory talk was finally interrupted by yawns and reminders of tomorrow’s plan to visit the famous Multnomah Falls where we would Look, Climb, Eat, and Photograph: 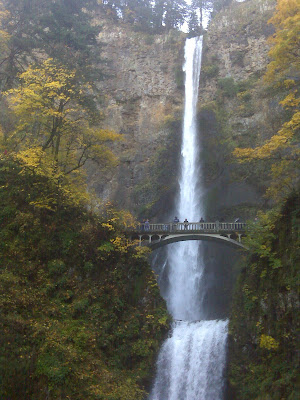 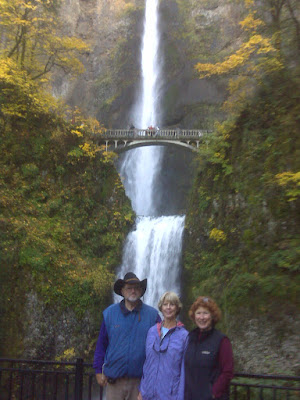 And where these two photos were taken by Dick’s tiny Blackberry, saving the day due to Patti’s camera having been left at home! That’s we three up on the bridge, also!
If only we had photographed the yummy Sunday Brunch at the adjoining stone church-like-looking edifice. We four, I fear, ate for six.

The next day we went from the roar of cascading Falls to the roar of Mt. St. Helen’s eruption. But first we were gifted with Dick Blide’s famous Crab Cake dinner, seven layer salad and Key Lime Cake at home.
Luckily the Blide’s copy of “the real thing” of Mt. St. Helen’s eruption via DVD allowed us to stay at home that night by a cozy fire to watch the famous 1980 eruption of Mt. St. Helen’s in all its beauty and “horror.” This film of before, during, and after, was riveting. We decided further, even though actual mountain visits were closed for the winter, we would visit that part of the mountain always open: The surrounding forestation terribly affected by previous lava flow: 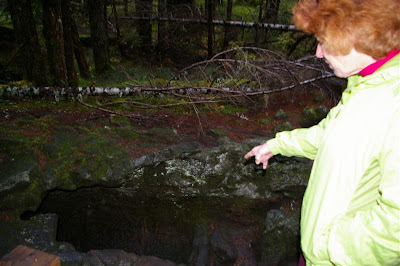 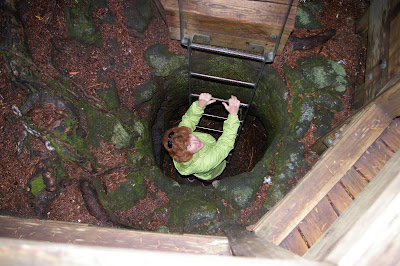 Only Ingrid was brave enough to get down into the “hole” left by rushing lava many years ago, which flowed around trees, that later died, leaving these gaping holes and tunnels under ground.

Thank goodness for the meandering man-made wooden trail for us to use without danger of falling. 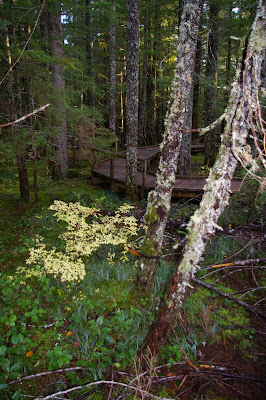 Our final day was, by comparison, “A Walk in the Park” at lovely Kalama Park on the Columbia River, recognized by its 4 “tiered” Totem Pole which is at least 150 feet high. The art work on wood reminds viewers that Kalama was “discovered” and built up by John Kalama of Hawaii. 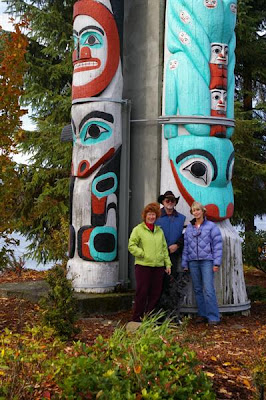 Our evening visit was Dick’s favorite down town Portland spot, Portland City Bar and Grill sitting high atop the enchanting vista of busy and beautiful Portland right on the meandering Willamette River.

This photo of our chosen evening courses is as serene and lovely as the entire remembered visit.
Life is Good 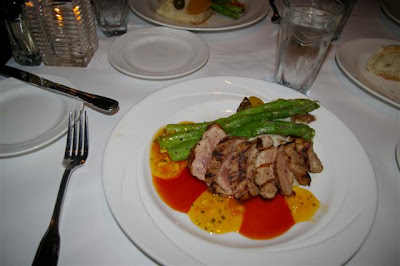 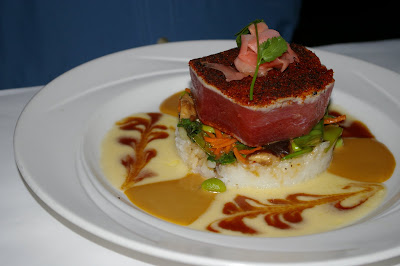